A few days ago, a friend of mine let me know that Amanda Palmer was coming to Toronto on the last leg of her Book Tour. Unfortunately, by the time I got the message she followed up on it: informing me that the Lee’s Palace venue tickets were sold out. I’m not exactly sure why I did it. I had a suspicion and I applied for a ticket on Ticketfly: just to see if I could. It was this same hunch that had me standing in a line outside of Lee’s Palace for over an hour with the rest of Amanda Palmer’s fans: again, just to see if they would accept this ticket and let me in.

We all stood out there for a while: waiting for the doors to open past their 8 pm deadline. A fellow fan was nice enough to pass around free doughnuts: which was pretty good indicator of just what kind of crowd was gathered there. In all honesty, when the line started moving I was a little bit stunned that the establishment let me straight through.

At one point Amanda herself appeared in the window above the stage and everyone cheered. During more preparations, as more people kept coming in, the music playing at Lee’s Palace would pause just long enough to get everyone to think that their night had begun: to revving them up further.

But it wasn’t long until Amanda herself finally came on stage, tossing flowers to the audience, strumming her ukulele and as she talked it got more difficult to describe the night in linear detail as I got caught up in the palpable joy of the crowd. She came onto the stage with another Amanda: a sign-language interpreter whose translations of Amanda’s words and songs were just as beautiful and interesting to watch as Amanda herself. In fact, sometimes it was good sort of challenge for me to split my attention in focusing on either one or the other.

After a request from a fan, we got to learn that out of the one hundred and ninety songs Amanda has created, she has apparently only memorized ten of them. She read from parts of her book The Art of Asking, while letting a fan perform an act of bibliomancy and selecting a passage for Amanda to read: even as another came on stage and choose a few sentences that Amanda decided to put into vocal music. In her book, she referred to a bit of history from Richard Zack’s An Underground Education with regards to Henry David Thoreau and how, while he made his hermitage at Walden Pond, he visited his rich friend that owned the property and accepted baked goods from his family.

The moral of the story is the core of The Art Asking: namely, don’t feel bad about taking the doughnuts. This is the second time I’ve mentioned doughnuts at the Book Tour. Very soon, I will talk about it for the last time.

There were a few particular parts of the Toronto Tour that particularly stuck out for me. Amanda began the event by playing her version of “Fuck The Police” — a day after the Ferguson verdict — and informed us that she was Toronto’s peace protest before this part of her tour that day. I have to admit, it did make me pause and it brought up some very uncomfortable issues for me: of the violence, of expression, and of cultural appropriation.

She also played a vocal duet of Dresden Doll’s “Delilah” with Whitney — who is a talented musician in her own right — while on her keyboard. This led to another difficult subject. It was after this song about an abusive relationship that she invited Sasha Manes of the Toronto YWCA branch on stage to talk about the importance of women’s and children’s shelters as well as her own organization’s charity initiative. Amanda’s Book Tour shared the same day as the International Day for the Elimination of Violence Against Women.

And both on her own initiative and when asked by her guest Eric Alper the Director of Media Relations for eOne Music Canada, Amanda also didn’t shy away from talking about Jian Ghomeshi. She talked about how many of her fans didn’t want him to be there and how, in the end, she didn’t want her Book Tour in Toronto to be overshadowed by, or all about  him. At least, that was my understanding of the matter.

Eric Alper himself covered a fair bit of ground in more ways than one. Remember how I mentioned doughnuts twice? Well, Alper decided to distribute seven hundred Timbits to the entire audience while he and Amanda kept talking. They talked about a range of topics: from the dangers of all music being placed under digital rights management again and no longer available to share freely online, to Amanda’s hopes on what crowdfunding might do to free more artists and their audiences from the influence of an unchanging music industry.

I was particularly intrigued when Alper asked Amanda just what she cut out from the final draft of her book. She mentioned two anecdotes: one about the fact that her programmer mother’s team worked with and accepted the identity of a transgender member as a given in the 1960s, and another about a woman thanking her for her work as a living statue in representing “white power.” Certainly, these are stories in and of themselves.

At one point, Amanda’s friend Anthony was brought up. Anthony Martignetti is a psychotherapist, but to Amanda he is her life mentor and friend. He has been suffering from cancer and, as of this post, has gotten a bone marrow match. He has written two memoirs about his family life and his own: and as someone who has reviewed both of his books, I can’t help but think to myself that when Amanda at one point began to sing Dresden Dolls’ “It’s All In The Family” that she was referring to Anthony as much as to herself. Indeed, at one point when she was reading an excerpt from her Art of Asking, I realized that it was actually the preface that she wrote to Anthony’s Lunatic Heroes.

After Amanda took some questions from the audience, she proceeded to wrap up the night with two songs. The first was “Bigger On The Inside,” which aside from the coincidental geek reference is also a song she played for the first time at Anthony’s Beloved Demons book launch. It is a raw, poignant and very real song written from a dark place in an attempt to grasp at meaning.

Of course this prepared the way for “The Ukulele Anthem” finale: a triumphant and passionate song about expression and hope.

Finally came the book signing part of the night. The line became something of a spiral and given the fact that I’d rented Uzumaki a few hours before, I almost wondered if everyone was going to become enmeshed into a great pattern and be stuck with each other, in a more positive way, forever.

I hung back for the crowd to die down a little more but I still managed to make some friends at the end of the night. I’m told that this is not an uncommon occurrence during one because there is just something about a fanbase or community of geeks and survivors that Amanda Palmer’s music and sheer presence brings together. Even looking back at the people who hummed and song along to her songs, it made me realize that many of them had memorized them by heart. For a while in time, it almost felt like the Fraggle Rock world promised to me as a child that never panned out into adulthood.

By the time I came to Amanda Palmer with my copy of The Art of Asking, my legs hurt from a combination of the hard raised benches of Lee’s Palace and standing when the discomfort grew too much: a minor version of the story Amanda recited from Anthony about a dog that won’t move off of a nail because it doesn’t hurt enough yet. Amanda herself looked utterly exhausted. From the blurry pictures taken faithfully by her awesome assistant Cat, you can glean that she was barely awake and I was not particularly that coherent.

All I said to her was that my friends said hello and that, if she remembers, to tell Anthony I said hello as well. And that was pretty much it. I wrote this whole account by hand initially: one on the back of my Porter Square Books receipt from Amanda’s local book store Porter Square Books, when I couldn’t get it from Amazon due to its issues with the book’s publisher Hatchette, and the ticket that I wasn’t sure would even let me into the building.

I wrote this from my new friends’ house where I stayed for the night after we all left together, frazzled from meeting a celebrity, for drinks. They are in the process of moving out of the country. It’s funny how things can work out that way. Just as this was Amanda Palmer’s first Book Tour, this was my first ever somewhat musical concert or event I actually enjoyed. It was my first Amanda Palmer event. Actually, Amanda had another term for her Tour. She actually called it a Book Circus.

So this was my first Book Circus. And a good circus delivers excellent food and entertainment, but this one also makes you see the uncomfortable things, the difficult questions, and the fragile strength of tired, blurry figures in the night. 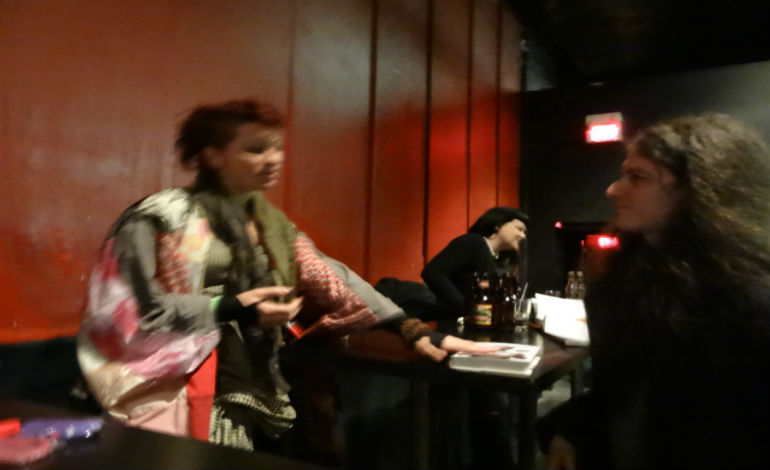 This is the clearest picture I have. And yes, my hair is down too.

Either way, it is already an unforgettable experience.