Phineas and Ferb to End Summer This June

I don’t know about any of you but, when I was in public school, I averaged about 70 days of summer vacation a year.  This explains the tinge of jealousy I feel whenever I hear the theme song for Phineas and Ferb proclaim, “There’s 104 days of summer vacation…”  Realizing that the boys have somehow managed to stretch a single summer over 7 ½ years, 223 episodes, and one movie, my jealousy is replaced by a respectful awe.  (I can only presume their repeated tinkering with the laws of physics has resulted in an alteration of the very fabric of time.)  But summer vacation loses its sense of freedom unless you know it will one day end.  Phineas and Ferb held it at bay as long as they could but, on June 12th oddly enough, the last day of summer arrives. Cheer up, gang! You had a heck of a run.

Phineas and Ferb officially premiered on September 28th, 2007 in order to answer the age old question:  How can kids keep themselves entertained over summer vacation?  The series was very formulaic right from that very first episode.  (And no, I don’t know how you can be formulaic before there is a formula to follow.  It just was, ok?).  But it was formulaic in the good way.  Formulaic like the best cartoons of the Golden Age of Animation; using a formula as a base of familiarity in which to mix in outlandish situations, physics-defying logic, and clever jokes.  Formulaic in a tongue-in-cheek manner that mocks its own use of formula.  Formulaic while seeing just how far the formula can be diluted before it fails. Hmmm, maybe I should have gone with a blueprint metaphor instead of a formula one.

With the phrase, “Ferb, I know what we’re going to do today,” Phineas would set himself, his brother, and their friends on a daily quest to make the most of the freedom each day of summer offered them.  Most quests were colossal in design, ambitious to say the least, and dangerous if you stopped to think about it.  They also required an enormous amount of resources, an extremely high level of technical expertise, and a disregard for physics as we currently understand it (although I suspect we just have yet to obtain Ferb’s level of understanding). Phineas and Ferb try out their latest creation.

For every plan the boys hatched, older sister Candace would be on hand to rat them out.  Or try to anyway.  Part of the fun was trying to predict how all trace of the boys’ escapades would be obliterated moments before Candace was able to get their mother to check in on them.  It wasn’t that Phineas and Ferb were intentionally trying to hide anything from their parents or thought they were doing anything wrong.  They even seemed oblivious to the fact that Candace was trying to get them busted.  Phineas and Ferb simply went about their business and somehow fate would intervene to prevent them from getting caught. Candace realizing that there is nothing to show her mother…again.

In parallel to the kids’ escapades, each summer day also saw a second, independent but often intertwined, story unfold.  These tales involved the family’s pet platypus, Perry.  Perry is, in fact, a secret agent working for the O.W.C.A (Organization Without a Cool Acronym).  As Phineas and Ferb are keeping themselves entertained, Perry is off thwarting the evil schemes of Dr. Heinz Doofenshmirtz.  Dr. Doofenshmirtz may be my favourite incompetent villain of all time.  Despite having the intelligence to create some pretty impressive ‘-inators’ (as in the deflate-inator, the ugly-inator, and the misbehave-inator), his evil schemes are surreal in their ineptitude.  Take into account that he is a lonely divorcee trying his best to be a good father to his teenage daughter and even his nemesis Perry can’t help but be sympathetic towards him. 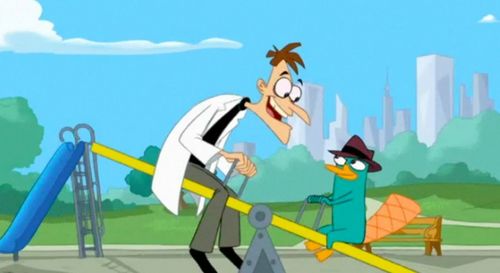 Dr. Doofenshmirtz and Agent P in a more amicable moment.

As a fan of hand-drawn animation and a parent with two daughters, I am very grateful for Phineas and Ferb.  It was an oasis in the Disney Channel desert of tweencoms.  Like Gravity Falls (another oasis), it offered quality animation and intelligent humour that my daughters and I could enjoy together.  I’m not ashamed to admit that I was the one who was disappointed when we missed the Phineas and Ferb photo-op during our trip to Disneyworld last year.

Starting June 9th, the Disney Channel and Disney XD will air a 73 hour marathon of the series culminating in the hour long series finale titled, appropriately enough, “Last Day of Summer” on June 12th at 9:00pm ET.  If you are looking for my daughters and me, you know where to find us.

Will Punisher Get A Spinoff?

The Nerds: The X-Files Podcast