With the arrival of Digimon Adventure Tri, Ash and Pikachu’s reign of terror ends. Here are 10 new and old facts about Digimon that prove its superiority once and for all.

1. The characters actually grow up. Digimon Adventure Tri (2015) explores how the original Digidestined have changed in the six years since their original adventure. Meanwhile Ash is still ten and Pikachu is still not Danny Devito.

And sometimes, like with Flamedramon, their voices are pure fire.

3. The fans have gay ships and the writers are totally into it. 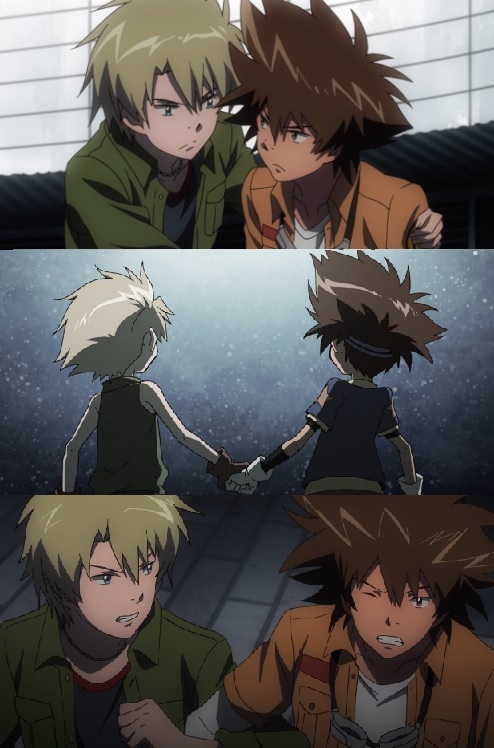 THIS IS NOT FANART. THIS HAPPENS.

4. Fusion is the coolest thing ever. Powerful Digimon can fuse to become giant mech-like monsters. They even based a whole series around the concept with 2010’s Digimon: Xros Wars.

Charizard and Blastoise, you’re slipping. Get on this!

5. Sure Pokemon had one awesome theme song, but Digimon has plenty.

This is only one example. Check out “Brave Heart,” Digimon Frontier’s English opening, and of course the original Digimon English theme (DI-DI-DI-DI-DIGIMON).

It also had Smash Mouth, Barenaked Ladies, and every other cliche late ’90s – early 2000s tune.

7. There are actually consequences in the Digimon Universe.

In series 3, a central character’s Digimon is killed and she enters an irreversible depression that only gets worse as the show goes on.

In Tri, Taichi is haunted by PTSD from their battles six years ago and is deathly afraid that Digimon will injure innocent people in the real world.

8. The new art style is stunning. And those rookie level Digimon are gosh dang adorable.

9. The creators grew up with their audience.

Whereas Pokemon repeats a tried and true formula to attract new groups of youngsters over and over again, Digimon Tri is unquestionably catered to the young adults who grew up with the original show.

10. Goggles will never go out of style.

And that is a scientific fact.