Say what you will about the hot-headed Kylo Ren’s striking similarity to internet troll dudes, there’s no denying that his story is one of tragedy and pain. German artist Jenny Dolfen recently released a series of prints that depict how Kylo might have been feeling throughout some of his darker moments in The Force Awakens. Below are a handful of illustrations that just might break your heart, all of which are available at Dolfen’s etsy store: Kylo tends to the crossbow wound Chewbacca inflicted upon him and remembers the childhood he spent playing with his Wookie uncle. Dolfen portrays how much Chewie cared for Kylo as well, making the crossbow attack that much more emotional knowing Chewie shot someone he helped raise. A shy looking Rey tries her best to help teenage Kylo work through his emotions. What if Rey was the only one who ever cared to ask him about his feelings, and now their last interaction was her scarring him and leaving him on a dying planet? This one hurts the most. In the deleted scene where Kylo boards the Millenium Falcoln to capture the resistance fighters, he pauses by the cockpit to collect himself. Suddenly memories of his father flying him through space for the first time rush through his mind. 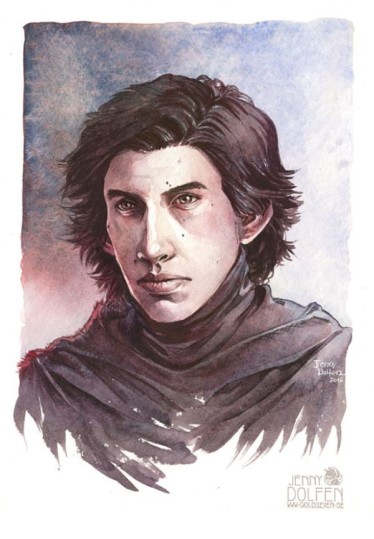 The artwork is beautiful and gives us one of the closest looks into the man behind the mask since his appearance on Undercover Boss. Until Episode 8 rolls around and tells us otherwise, I’m using Dolfen’s interpretation of the character’s past as my headcanon.